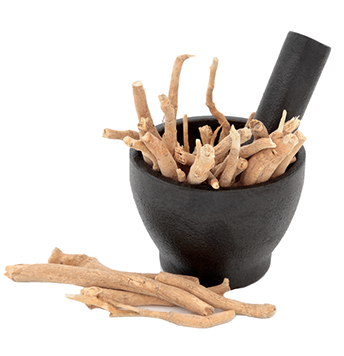 Withania somnifera, or Ashwagandha, is a shrubby plant cultivated in India, parts of East Asia, and Africa that offers tremendous potential as an energizing medicinal herb. Ayurvedic practitioners have used the roots of this plant for centuries with success as a tonic to increase vitality and longevity, as well as to treat health conditions as diverse as tumors and arthritis. Laboratory studies have begun to confirm what Ayurvedic practitioners have known for years— that Withania somnifera deserves attention as an herbal therapy that can help ease many of today’s common health problems.

Sometimes referred to as “Indian ginseng” because of its stimulating effects, Ashwagandha is used to calm the mind, relieve weakness and nervous exhaustion, build sexual energy, and promote healthy sleep. In Ayurvedic practice, the herb is considered to be a rasayana, which means that it acts as a tonic for vitality and longevity. It also is classified as an adaptogen, meaning that it assists the body’s immune and other defense mechanisms in coping with stress factors.

Traditionally, Ashwagandha has been used as an aphrodisiac, a liver tonic, an anti-inflammatory agent, and as an astringent. Less well-established but potentially exciting properties of Withania somnifera are its ability to optimize mood and brain function. Ashwagandha also is used for patients with nervous exhaustion, debility as a result of stress, and as an immune stimulant.

As Western medical practitioners become more receptive to the possible contributions of non-Western medical traditions, Ashwagandha may begin to be used as part of multi-layered medical therapies to replace or lower the dosage of modern drugs that have problematic side-effects.

Hindi: Asgandh Sanskrit: Ashwagandha It belongs to the Solanaceae, or nightshade, family.

Withania somnifera grows natively in India and parts of Asia, Africa, and North America. It is grown fairly easily in sunny locations with well-drained soil. Although by nature it is a perennial, Ashwagandha may be grown as an annual and will blossom and bear fruit in its first year when grown from seed.

Ashwagandha is an erect shrub that grows to a height of about 2 feet. Its stem and branches are covered with tiny star-shaped hairs. The root, the part that is most valuable for medicinal uses, is fairly long and tuberous, with two or three lateral roots slightly smaller in size. The roots are grayish yellow with longitudinal wrinkles and a so center mass with scattered pores. They are characterized by a strong odor—hence the Indian name for the plant, which translates as “horse’s smell.”

The plant flowers throughout the year. Its leaves are simple and ovate in shape, measuring about 10 centimeters long. The leaves are alternate in arrangement. The plant’s flowers resemble others of the nightshade family. They are small, greenish-yellow blooms borne in short axillary clusters. The fruit is a smooth, red enclosed berry, about 6 millimeters in diameter.

The roots of Withania somnifera consist primarily of compounds known as withanolides, which are believed to account for its extraordinary medicinal properties. Withanolides are steroidal and bear a resemblance, both in action and appearance, to the active constituents of Asian ginseng (Panax ginseng) known as ginsenosides.

Centuries of Ayurvedic medical experience using Withania somnifera have revealed it to have pharmacological value as an adaptogen. Ashwagandha has been found to:

• stimulate the activation of immune system

• counteract the effects of stress and generally promote wellness.