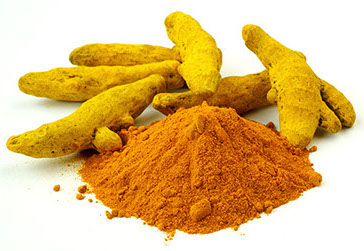 Curcumin (Curcuma longa), known in Sanskrit as Curcuma, is a perennial herb that is cultivated widely in tropical regions of India and Asia. Its rhizome is the source of the spice turmeric, which is used in cooking in many parts of the world, mainly as a principle seasoning and coloring in curried dishes. Curcumin, feruloyl methane, is the yellow pigment extracted from turmeric. Curcumin has become widely used as a food coloring and dietary additive. Extracts containing curcumin also have been used in medicine in India and Southeast Asia for generations. Dietary intake of curcumin is especially high in these areas of Asia, where adults consume up to 200 mg of curcumin per day.

The name “curcuma” is derived from the word “kurkum,” the Arabic term for the plants of this genus. Among the several varieties of curcuma, Bengal turmeric is the best known. Because of its vivid yellow-orange pigment, turmeric often is used in dyeing fabrics. It is an important substance in the Hindu religion, a part of all religious occasions.

In Ayurvedic tradition, turmeric is a general tonic and blood purifier.

Curcuma is native to south Asia, especially India, but is cultivated in many other warm regions of the world as well. It is found in all states of India but particularly in Tamil Nadu, West Bengal, and Maharashtra.

Curcuma is a perennial, stemless herb that reaches up to 1.5 m in height. Its leaves are large, pale green, elongated, and tu ed. e rhizome is short, branched, and bright yellow within. e pale yellow flowers blossom in dense, cylindrical in florescences, from 10 to 15 cm long, which develop in the center of the leaves.

More than 20 components have been identified from Curcuma’s leaf oil, of which the major monoterpenes are α-phellandrene, 1,8-cineole, p-cymene, and β-pinene. Others include αterpinene, γ-terpinene and terpinolene. Curcuma also contains the glycans Ukonans A, B, C and D, as well as the sesquiterpenes zingiberene, bisabolol, germacrone, and sabinene. Additional chemical constituents include arabinose, ascorbic acid, ortho and p-coumaric acid, and phytosterols.