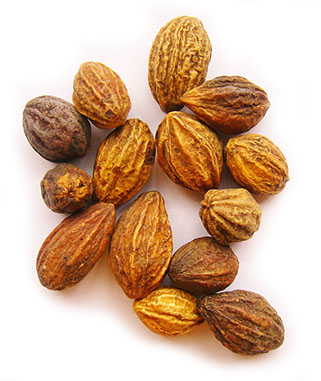 Terminalia chebula, known commonly by its Sanskrit name Haritaki, is a plant of great importance in Ayurvedic medicine. It is an ingredient of the popular formulation Triphala, or “three fruits,” a rasayana that also contains Terminalia bellerica (Bibhitaki) and Phyllanthus emblica (Amalaki). Haritaki was first mentioned in Chinese medicine in 1061 and also is used in Tibetan medicine, where it is referred to as the ”king of medicines.” According to legend, it is thought to promote fearlessness.

Haritaki bark has been used in Indian medicine for at least 5,000 years as a remedy for digestive issues.

The aerial parts of Haritaki—its fruit, leaves, and stem—are used medicinally in Ayurveda. Haritaki is an aperient, astringent, cardiotonic, carminative, fungicide, laxative, tonic, demulcent, purgative, alterative, febrifuge, anti-asthmatic and anti-dysenteric. It is believed to help strengthen the brain and enrich the blood.

Haritaki occurs natively in the sub-Himalayan tract of India. It also is found in Myanmmar, Sri Lanka, and other Asian countries, growing up to elevations of 1500 meters.

Haritaki is a large deciduous tree that reaches 30 meters in height. Its trunk is as wide as 2.5 meters. The bark is dark brown, often longitudinally cracked, exfoliating in woody scales. The leaves are glabrous, opposite, ovate, or elliptic and up to 20 centimeters long with an acute apex. the flowers are yellowish-white, in terminal spikes, with an unpleasant odor. The fruit is an ovoid hanging drupe, up to 5 centimeters long, yellow to orange-brown in color, sometimes tinged with red or black, and hard when ripe the seeds are hard and pale yellow.

Tannins and polyphenols: Chebulinic acid, chebulin, punicalagin, punicalin, ter avins A, B, C and D, maslinic acid, gallic acid, synergic acid, terchebulin I, 1,2,3,4,6-penta-O-galloyl-beta-D- glucopyranose and others have been isolated.