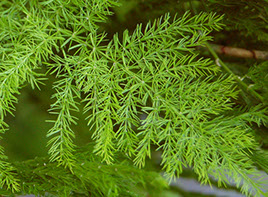 This sweet and bitter herb is best known in Ayurveda as a female rejuvenative.

Asparagus racemosus, or Shatavari, is a climbing plant that grows in low jungle areas throughout India. Shatavari is a cooling, calming, nourishing, and purifying herb, rich in Vitamin A, nutritious starches, and hormone analogues. is bittersweet herb is best known in Ayurveda as a female rejuvenative. Shatavari has been renowned for centuries in India for its beneficial effect for the female reproductie system, decreased libido, and cervical pH imbalance.

The benefits are not exclusive to women’s health, however. This herb also is effective for male general sexual debility. Shatavari is classified in Ayurveda as a rasayana and is believed to bring into balance all of the body’s fluids. Ancient Ayurvedic texts recommend Shatavari as a remedy for the nervous system.

Shatavari is a creeping variety of the plant genus Asparagus, characterized by a spreading root system. A climbing plant, it grows to a height of 2 meters, and bears many spiny branches. Its leaves are reduced to cladodes. Each Shatavari plant has many tuberous roots, which, when processed and dried, are used in medicinal preparations. The stem is pale gray or brown in color, and woody. The flowers are small, white, fragrant profusions, growing in simple or branched racemes.

More recent revisions in taxonomy have moved the genus Asparagus from the subfamily Asparagae in the family Liliaceae to the newly created family Asparagaceae. About 300 species of Asparagus are known to occur worldwide, including Asparagus officinalis (the common asparagus consumed as a vegetable), Asparagus sprengeri, and Asparagus acutifolius.

Steroidal saponins and sapogenins are believed to account for the medicinal potency of Shatavari. These chemicals include a unique group known as Shatavarins I-IV, ß-D-Glc-(1-4)-ß-D-Glc-(1-2) α-L-rha sarasapogenin, arasosapogenin. Sterols and diosgenin also have been isolated from the roots of Shatavari.

Additional chemical constituents include the alkaloid Asparagamine A, isolated from the plant’s roots. Ripe fruits from Shatavari have yielded the avonoids quercitin, rutin, hyperoside, cynidin 3-galactoside, and cynidin-3-glucohamnoside. Quercitin-3-glucuronide also has been isolated from the leaves of Shatavari.